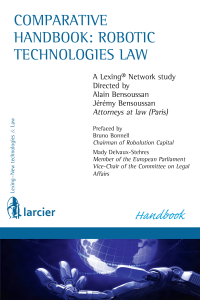 Studies of the overall impact of robotics on the economy have shown that investments in its various sectors – industrial, professional and service robotics – are increasing globally and the markets associated with them are valued in billions. Robotization improves the competitiveness of enterprises, while collaborative robotics reinvents methods of production.

Beyond the economic outlook, service robotics, backed by the development of artificial intelligence, raises challenging ethical and social issues.

The legal analysis of robotics is no mean feat because it covers a very diverse technical reality. Companies whose businesses are focused on robotic technologies and applications can be confronted with a complex legal situation resulting from the plurality of the applicable rules which have not necessarily been conceived or adopted bearing in mind their specific constraints.

This situation should not hamper their development. It only implies taking cues from the economic legal norms which promote such developments and conducting an analysis of the legal risks which they face, given the applicable rules of liability.

This comparative study – carried out by members of the Lexing® Network – proposes an overview, having regard to the legislation of 17 different countries, of the legal issues raised by robotics and the way the law in force responds, in a more or less satisfactory manner.

A Lexing® Network study directed by Alain Bensoussan and by Jérémy Bensoussan.
Prefaced by Bruno Bonnell (Chairman of Robolution Capital) and by Mady Delvaux-Stehres (European Parliament Deputy, Chairperson of the Committee on Legal Affairs).